Not Me: Managing mail with the power of the “not me” mail flow rule.

That’s the number of emails currently sitting in a folder called “not me”. And that’s just from the last six months (because my mail auto-archives anything over six months old). Those TWO THOUSAND messages were NOT sent directly to me, but rather I was “cc’d”, “bcc’d” or on a distribution list (aka spam). Every one of those messages DESPERATELY wanted to steal time from my day, add their mass to my workload, add their clutter to my inbox, and destroy my ability to get ahead.

But these messages were unsuccessful at their mission of ruining my day. Why? Because they have one thing in common.

They weren’t sent TO me. As a result, I could filter them, automatically.

They don’t land on my phone (which only syncs the inbox). They don’t land in my inbox. They don’t give me alerts, bloops, bleeps, overlays, dings, bongs or bounces. They just silently go into the “not me” folder, and each day when I want to, I read them to confirm nothing critical is sitting there, and the intent of the “cc” is honored.

What is cc after all? It stands for Carbon Copy, which was an old office term for additional copies of memo (made using actual carbon paper as the typewriter banged away at the original). You’d send a memo to Bob, the manager responsible for sector 7 production, but figure that Ted should know about the issue in sector 7, so you send a copy of the message (again, actual paper), and the memo would get to Ted later in the day. Of course, since Ted wasn’t the intended recipient, he’d read it at his leisure, rather than saying “OMG MEMO” and dropping everything to read.

But with email, cc, bcc, distro lists, spam and more all conspire to jump into your inbox, distract you from ACTUAL direct requests, and doom you to a life of shuffling email.

So join me! Start saying “not me”. Creating the rule is simple. In Outlook, go to Tools->Rules and from there, configure a rule that moves messages NOT sent directly to you into a subfolder. 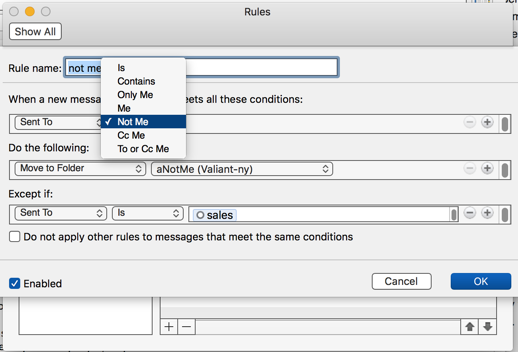 Basically, the rule is this- if someone wants you to DO something, SAY something or DECIDE something, they have to send the message TO you.

If someone cc’s you, they’re simply “informing” you of stuff (or worse, trying to sell you something). With messages that are “cc’d” to you, generally speaking, you don’t have to DO anything with them except (eventually, if you want to) read them. Keep those time suckers out of your inbox and stay on task. I’d generally suggest you read your “not me’s” once a day, over the afternoon iced coffee. Don’t come off task to read them while you’re trying to get ACTUAL work done.

Lastly, if you have people in your life that cc you, but actually want you to DO stuff with the message, they are wrong, and they need training. A good way to train bad email users is to ignore their emails by “not me’ing” them. When they complain, teach them how cc works, and invite them to join you in “not me” bliss. Oh, and send them a copy of this blog post.