Did you know it’s that wonderful time of the year? It’s PRIDE! June is LGBTQ Pride Month. In a nutshell, what began as a riot started by Drag Queens, Queer POC, and our Trans sisters, a result of the NYPD illegally raiding the Stonewall Inn, spurred the gay rights movement – and has now become an annual celebration for all things LGBTQ. Here at Valiant, we celebrate the diversity o all our staff members; working in technology it is said that innovation is bred by diversity, all of which starts with people. After all, “your culture will beat your strategy every time.” 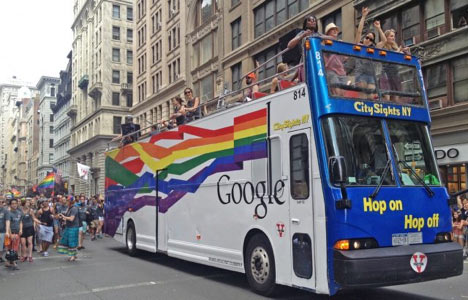 This acceptance wasn’t always the case, especially when it comes to the workplace. That era is fading away and if anything, a lot of corporations choose to join in Pride now. one of the strongest displays of support has been from the Technology industry – which really makes sense when you consider that these companies are at the forefront of innovation and pushing culture forward via technology, so isn’t it natural they they are inherently progressive?

I remember the first time I noticed the outpouring of support from the Tech community. It was 2012 and I was marching with the well-known Big Apple Dodgeball League. As we waited for the march to start I couldn’t help but just stare in awe that group in front of us. It was Google. We all know Google prides themselves on their corporate culture, but this was a spectacle. One thousand employees all patiently waiting around a Rainbow plastered double decker Bus in matching Grey shirts, in which the L was replaced with a charming Pride Flag. One could not help but just feel a sense of awe. Google had come, and they were here to celebrate, and they even brought the damn party bus. Although it shouldn’t be too much of a surprise as though Google is touted as one of the most progressive employers nationwide. Last year, Google launched their campaign #prideforeveryone which spotlighted Pride around the world. Hell, they even uploaded a 360-cam experience from all the March’s they were present at check it here. 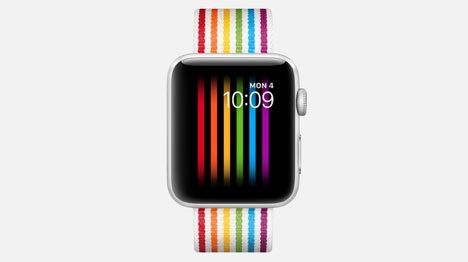 Now cut to Apple as a company, you will find that diversity is in abundance. After all, their soul is their people as stated in their credo. Now to compare to Google in 2012, Apple was still living like the Wizard hidden behind the curtain. They were always supportive internally, but public visibility was low. Two years later in 2014 Tim Cook, Apple’s CEO, came out while delivering a commencement speech which can be found here.

It was after that moment Apple’s visibility regarding such matters increased dramatically. It was then that summer they started a new tradition of marching in the San Francisco Pride Parade. Two years later they rolled out the Rainbow Nylon Apple Watch to employees only. I remember seeing an employee at my old store wearing one and being like, “Where the hell did you get that?!” The following year they released it. Although I don’t love that it as a marketing ploy, I guiltily bought it and in a way it was them physically showing their support continues unwavering.

The strongest commitment comes from Microsoft. Like seriously, Microsoft is woke and has been since 1993. It started back when Microsoft began offering its employees with same sex partners the same benefits as their heterosexual employees. In the 90’s this was unheard of. Since Microsoft continues to give back and strengthen the LGBTQ community when they started their own internal network called GLEAM. Here is the description right from their site: “GLEAM works to drive LGBTQ-friendly changes in company policies and in the work environment by providing support and networking opportunities for its members and promoting activities within Microsoft that raise awareness about the LGBT+ community.” Now that’s some dedication and to follow that they released this great piece highlighting Microsoft’s undertaking through the years and even if you want to expand you can look into the efforts of the Bill & Melinda Gates Foundation. Which has supported the battle against HIV/AIDS for decades and the battle for Equal Rights. Like I said they are woke.

So what’s the take away from all this? Technology makes our world better, so it is only natural through said process that the companies do as well. As Microsoft’s President and Chief Legal officer said, “Corporate standards, set by the private sector, can help companies articulate its values and stand up for the rights of LGBTQ individuals in the workplace and communities in which they do business.” The biggest innovators that we count on day in and day out are helping to define where we should be headed by leading by example. They are here, proud of their queers and working to build a better world and because after all: 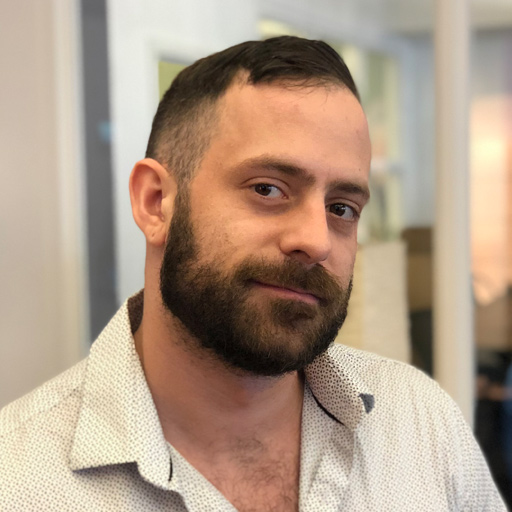 Prior to joining the team at Valiant Technology in 2018, Matt spent several years in sales including 3 years as an Apple Retail Sales Expert. Matt’s combined passion for sales...

Digital transformation is one of what seems to be an endless supply of tech terms that have become seen as...