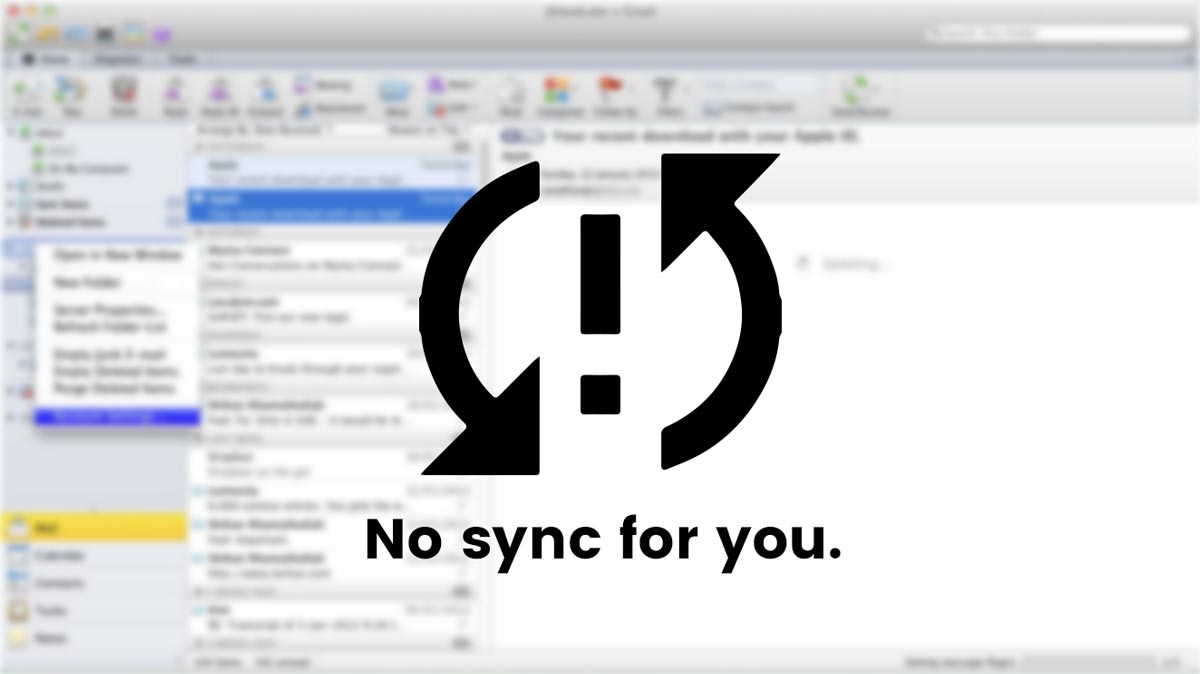 There have been numerous cases reported of Outlook 2011 for Mac not syncing properly with Exchange (both 2007 and 2010, 2003 is NOT supported by Outlook for Mac). The issues vary from mail not syncing at all to delayed and intermittent mail retrieval from the Exchange server to mail disappearing and just about everything in between. The problem is a communication issue between the mail client and the mail server. There is no “official” Microsoft documentation stating this but older documentation for Exchange 2000 and 2003 explains issues regarding mail store parsing by mail clients. Why this pertains to Outlook 2011 on the latest supported version of Exchange (2010) is unknown, but the existence of the issue is undeniable. Various reports from numerous forums (both Microsoft and non-Microsoft) indicate a variety of ways to combat this. Here is where this article will come to your aid.

Item Count Limitation: One of the biggest culprits (seemingly) is the high number of items users tend to have in their mail folders. Namely, the inbox and sent items folders. Keeping them under 5,000 or so items seems to keep things in shape. Despite no documentation stating there is a limit for Mac 2011, it’s apparent that reducing mailbox size can drastically improve performance and minimize downtime. Granted most will already have a mailbox in despair and cannot conform to this easily, it should be noted that it can be fixed. New users currently engaged in an Exchange –> Mac setup should follow this main guideline. That is, unless a system admin limits mail store size to something abominably low so this issue is avoided altogether. With new hosted Exchange providers exclaiming with pride about “unlimited mail storage”, you’ll be forced to organize in order to avoid breakage. Here’s what to consider:

1. Keep all folders item counts below 5,000, including the number of items in subfolders. Divide the mail up by year, by quarter, or even by month if you have that much mail. Catalog at your discretion. The best method to organezize (Taxi Driver reference) is to move individual items (by date or whatever you choose) within Outlook itself. Folder creation and movement should be done via webmail. I know for certain you can move folders in Exchange 2010. I need confirmation on 2007. Moving folders in webmail moves the items almost instantaneously. This is because the processing within the mail store is being done on the mail server itself. Moving large amounts of mail cannot be done in webmail because you can’t select over 50 items or so. It’s a weird little quirk, so just do it in Outlook; it’s easier to manage. Move the folders in webmail and Outlook should see the change within seconds.

EDIT: Sometimes folders freak out when near the 5,000 item count. I’ve seen a folder repeatedly try to sync and download non-existent attachments when as low as 4,300. I split this folder into two and BAM it was fixed. The only thing I can suggest is to spend some time on the initial sorting of your stuff and if in doubt, just split the folder up into smaller parts. I.E. a fiscal quarter’s worth of inbox items might be 5,500 items, so split it by month just to be safe.

Number your folders in order to have them sort nicely. The months aren’t in alphabetical order, so a folder with items from January can be named “01-Jan-Inbox-2012” to get it before the February folder, which you can name “02-Feb-Inbox-2012”. Here’s a sample way to organize:

Do not attempt to move more than one clump of mail at a time. If you are, for example, segregating a subset of mail from your inbox, maybe 4,000 messages, move that and WAIT until it completes. You’ll see Outlook initially move the mail into the folder locally. This is expressed with a little progress bar in Outlook. If you switch to the new destination folder you will see that the mail is transferring. This is noted on the bottom; on the status bar. Slow and steady wins the race in this case, so be sure not to overburden Outlook with too many tasks as it is liable to crash.

2. Do not put subfolders in the inbox or sent items folder. Instead put custom folders at the same level as the inbox. To do so in Outlook 2011, create and name a new folder then drag it up so your mouse cursor is in the tiny space above the inbox folder. It should look like this when you’ve done it: 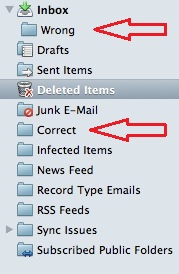 I’ve not seen issues with subfolders of custom folders. This is likely due to the fact that the inbox and sent items folders are the most often checked when Outlook synchronizes to the mail server. Other folders… well… they’re not checked so much. In essence, what I’m saying is, Inbox and Sent Items should have no more than 5,000 items BUT no subfolders. Custom folders should have no more than 5,000 items but CAN have subfolders, each of which can have their own set of 5,000 items and more subfolders. Make sense?

3. Do not store mail in the “On My Computer Section” of Outlook by manually dragging or copying mail to the folders in there. In this section you will another inbox, sent items, drafts, deleted items, and junk folder. The biggest gripe I have with this is the fact that a database explosion (or implosion, whatever you wanna call it) while mail is stored here could result in permanently lost mail if you cannot recover the database. You can avoid this scenario entirely by making sure this is hidden. Click “Outlook” in the upper toolbar the go to “Preferences”. Then click the “General” tab. Tick off the option to hide that section.

EXCEPTION: When you have imported mail from an archive (.olm file) you must have this tickbox unchecked in order to see the archived mail. Just be weary of placing anything outside of the archived mail folder.

SIDENOTE: Also note the grouping option. If you’ve more than one account setup, you might want to uncheck this box. Enabling this grouping pools all the inboxes. sent items, and deleted items folders together. I find it easier to use and thus easier to manage accounts when they are all separate. Also, accidents happen. I’d rather not have a folder with 500 items accidentally moved to another account, thus filling that account with that data and possibly causing space issues.

4. Archive old mail into separate files. This reduces the risk of loss (especially when combined with step 3 above) and reduces the time required to get an Identity up and running again should a database become corrupt. For more details on how to archive mail effectively, refer to this article Archive Email in Outlook 2011 for Mac.

5. Forgo the idea of rebuilding your database. While on Exchange, this step is useless. It will take you less if not the same amount of time to create a new identity rather then trying to rebuild a corrupt one. Note this is only an option when you DO NOT store mail in the “On My Computer Section”. Ah ha! It all comes together. When the only mail that is stored locally is in archived files, all you need to do is create a new profile, setup your account, then import your mail. To manage identities you’ll need to utilize the Microsoft Database Utility. Hold the Option key while clicking the Outlook icon in the dock (it’s located in the /Applications/Microsoft Office 2011/Office folder). From here you can create a new identity, set it as the default, then re-add your account. Outlook will then re-sync everything from the server, fresh, from scratch. We can minimize the time of the sync, too. Which brings me to…

6. Set Outlook to download headers only. Doing so minimizes time of initial account synchronizations and lessens the time needed to move large amounts of mail within the mailbox (example, when organizing after you’ve read this). The tradeoff is that you need to be online to read messages. Since only the crucial parts of the email are initially downloaded, acquiring the content and/or attachments requires you to be online in order to download them. Your exact situation will govern whether or not this will be help or a nuisance to you.

There might be more tidbits we can add but for now this is what I’ve got, and so far it seems to work rather well. Should there be any other updates they will be appended.

Should you find yourself creating a new database because the last one was corrupt it’s strongly advised to verify the filesystem and partition using the Disk Utility found in the /Applications/Utilities folder. A corrupt/failing drive might have caused the issue in the first place. 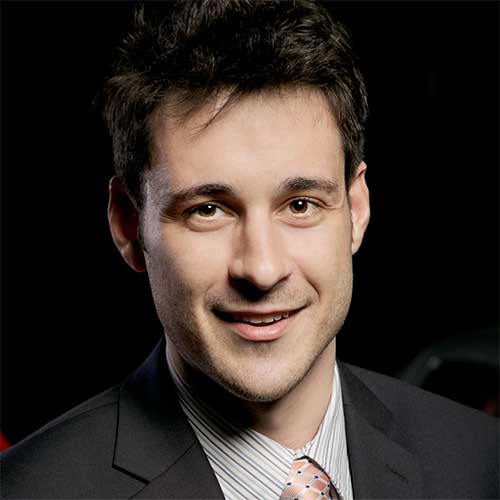 Dan is our central services or ‘shared services’ tech. That means he’s the guy that builds the tools we all use! From our remote control systems to our deployment engines,...

Microsoft Outlook has a ton of amazing features that are often overlooked (because there are so many). One that people...

Office 365 vs Google Apps for Work

Cats or dogs? Coke or Pepsi? Office 365 or Google Apps for Work? These are eternal questions that lead to...

Not Me: Managing mail with the power of the “not me” mail flow rule.

2590. That’s the number of emails currently sitting in a folder called “not me”. And that’s just from the last... 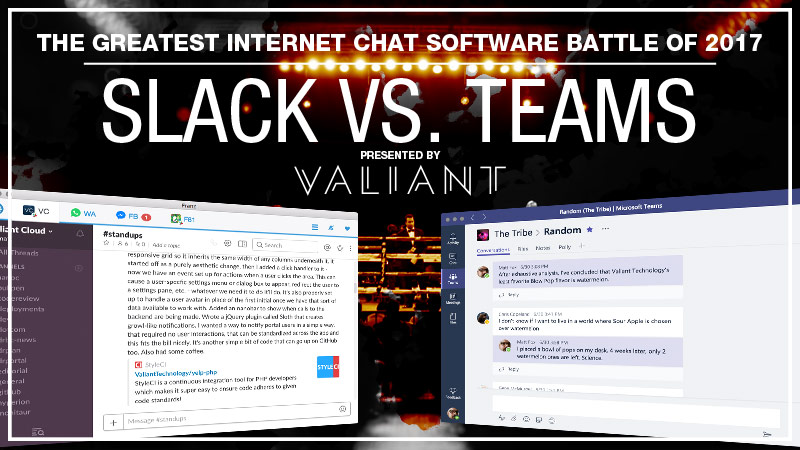 Teams vs Slack, Round 1!

INTRODUCTION Welcome to the first round of results from our internal Teams Vs Slack showdown. We’ve had our share of challenges, with some whining,...

Archive Email in Outlook 2011 for Mac

Getting those emails stating your mailbox is full? Not getting mail because of it? Tech Support urging you to archive...